What Makes Split Rail Fencing So Unique and Useful? 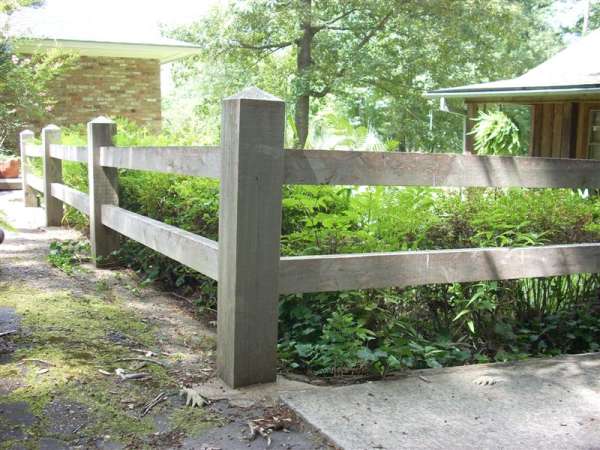 Split rail fencing has been widely used in the United States for hundreds of years now. While it may not make the fanciest fence, it is incredibly versatile and functional. Primarily used in urban settings, it has distinct advantages over other types of fencing, especially in areas where the ground is too rocky to dig post holes. Split rail fencing is easy to install and requires very little maintenance, making it a good choice for unskilled landowners.

Installing a split rail fence requires very few tools or supplies. Because this fence doesn’t need nails or hardware, it was a big benefit to American settlers, who didn’t have easy access to either of these things.

What the settlers did need was wood and lots of it. Split rail fencing was used mainly in areas where wood was already plentiful. Often, landowners could use wood from the trees that they cleared for farming to build their fence. The species of choice was American Chestnut. This tree’s lumber is naturally resistant to rot and has a straight grain, making it ideal for split log fencing. However, the chestnut blight took a considerable toll on the tree population, nearly wiping it out. Without chestnut wood readily available, cedar quickly became the wood of choice for split rail fences.

The unifying characteristic of the four types of split rail fence is the use of rough-split rails. These rails are made by cutting logs into 12-18 foot lengths. The logs are then split lengthwise into fourths or eighths depending on the diameter of the log. These pieces become the split fence rails. The way in which these rails are used determines what type of split rail fence it will be. 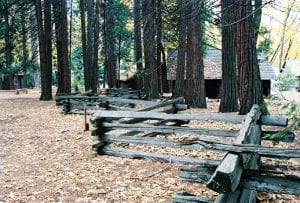 The most common type of split rail fence, the zigzag is also known as a snake or worm fence. As the name implies, a zigzag fence weaves back and forth. There are no posts to hold up the rails. The rails of adjacent sections of the fence are stacked on top of each other. One rail rests on top of the other like playing cards being shuffled. Thus, the rails support one another and give the fence its structure.

Eliminating the need to dig deep holes to set posts, this type of fence is ideal for particular landscapes. It is often used in areas where digging deep post holes would be difficult or impossible. A zigzag fence works well in heavily forested areas as it is easy to build around trees or other obstacles.

Without any permanent attachment between the fence and the ground or between the rails themselves, zigzag fencing can easily be reconfigured to meet changing needs. It is also easy to replace a worn-out or broken rail by unstacking and restacking the fence.

Developed in Eastern Canada, the patent fence was never actually patented. It earned its name from the fact that several patent applications were filed over the years for the design of the fence. However, none was ever granted.

The patent fence became popular on farms and ranches in Canada, as well as parts of the United Kingdom, for its ability to keep small and large animals contained. With multiple layers of rails from top to bottom, the fence could be used for the pigpen as well as the horse pasture. However, the areas of the country in which it was most popular were places where rocky soil prevented farmers from digging to set more permanent posts.

The key feature that makes the patent fence so unique is the reinforcement at the junctions. Where the end of one rail meets up with the beginning of another, there is a triangular support system. Rail pieces angled from the ground upwards to the top of the fence lend extra strength to these connections. 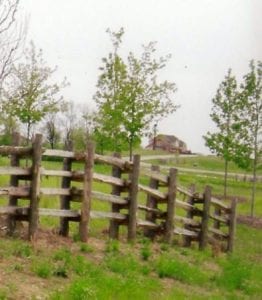 If the ground does allow for digging, posts can support the structure of a split rail fence. In a double post system, two posts are set on either side of the fence just far enough apart to allow rails to be stacked between them. A pair of posts at each end of the long rails gives the fence a paneled appearance and keeps the fence together. Because the posts are set in the ground, it is not easy to move the fence. However, the rails are not permanently attached and can be easily replaced as needed. 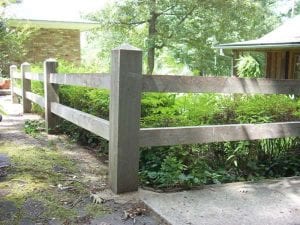 The most permanent type of split rail fence, a mortised fence, has posts set in the ground that have mortises (or holes) in the posts to hold the rails’ ends. Thus, there are a predetermined number of rails in the fence held by the posts. The rails are tapered at the end so as to fit into the mortises. They are good for horse pastures and are an attractive style choice, as they lend a rustic style to the property.

Split rail fencing has been around for centuries and will continue to be a solid fencing choice for years to come. It’s simplicity in construction and style lends itself to a variety of situations and allows for revision as things change down the road. Best of all, it eliminates the significant challenges some people face in trying to set permanent fence posts over long distances to keep cattle, sheep, or horses safe.